DAY OF THE AFRICAN CHILD REPORT

The Day of the African Child is celebrated by the African Union and its member states on the 16th June every year since 1991. It is celebrated in commemoration of the student apprising in Soweto South Africa in 1976 where nearly ten thousand black school children marched protesting against the poor quality of their education. This peaceful protests for their rights led to hundreds of the young students shot and hundreds more injured. It is therefore a time where members of the AU and the world at large reflect on the progress made towards protecting African Children’s rights as well as raising awareness on the need for the improvement of their education. They also focus on the challenges and barriers that they continue to face working constantly towards implementing sustainable solutions.

Polycom Development Project celebrated the Day of the African child in style. The event was held at the Salvation Army Church Hall in Kibera from 8AM-4PM. In attendance were the girl representatives (Hygiene and Sanitation Ambassador, Talking Box Ambassador and the Sports Ambassador) from 40 partner schools in Kibera, a total of 127 students. Polycom reminded the girls of their activities (The talking box, Sanitary towel distribution, Soap distribution and the Mentorship program) and emphasized highly on their role as ambassadors in their schools.

The girls were asked about what they loved about being an African children and their answers exhibited a lot of confidence and esteem.

Their responses were as follows; 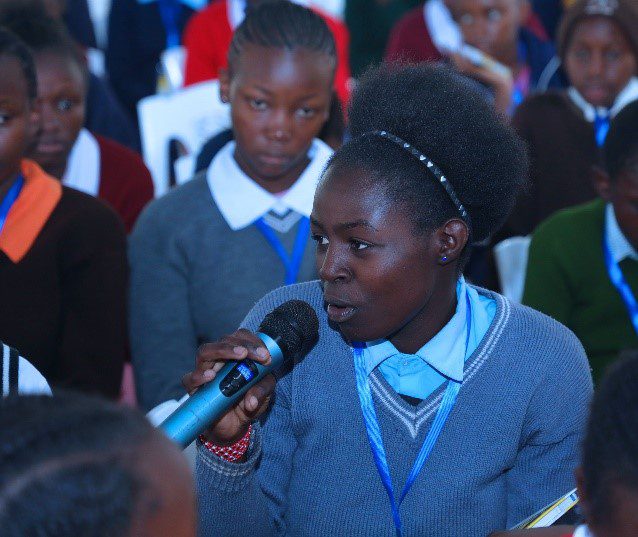 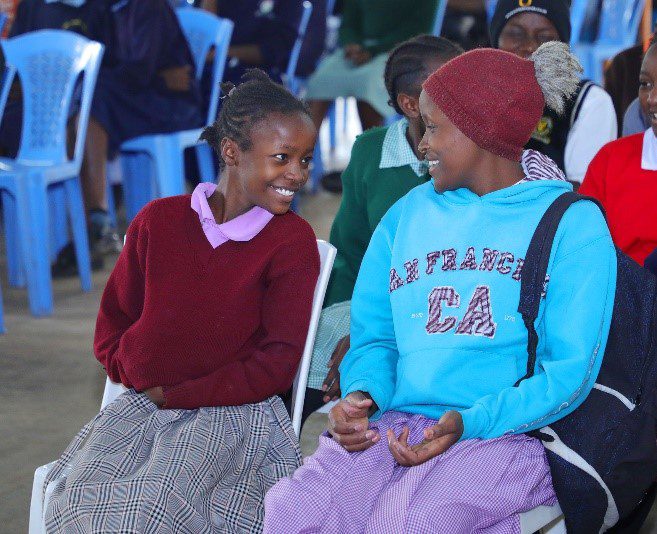 The girls were the then divided into groups and asked to discuss the harmful traditional practices affecting the African child. Their responses were as follows:

FGM is still a common practice among several communities in Kenya in this day and age. It is rooted in gender inequality and power imbalance and fighting it requires changing the cultural and social norms that increase the risk of harm to women. Some girls in Kibera are still undergoing the cut despite the constant efforts by the government, NGO’S and INGO’s to put an end to this practice.

Survey shows that 23% of Kenyan girls are married before their 18th birthday and 4% are married before the age of 15. This is a common traditional practice which still happens in Kibera. Poverty has proved to be the main cause of bride kidnapping as some parents see their daughters and a commodity in which the get bride price in exchange for.

Breast ironing also referred to as breast flattening, is a harmful practice that generally involves the repetitive pounding, pressing, ironing, rubbing, or massaging of a pubescent girl’s breasts, often using hard or heated objects, in order to attempt to stop or delay them from growing or developing, make them flatter, or make them disappear. This is usually done to “protect” children from predators but is indeed a harmful practice.

Sexual harassment is common in Kibera and the girls reported to frequently experiencing; staring and staking behavior, sexual comments, sexual invites, catcalls and exposure to pornographic content. One of the girls at the event reported to having rejected a boy and the boy threatened to sexually assault her mother. Another reported that her neighbor, who she shares a room with, would watch pornographic content in her presence and at times force her to watch the content with her.

Rape cases are frequent in Kibera and this often leads to unwanted pregnancies. This violent act is shockingly mostly conducted by family members/ family friends.

The girls reported to experience favoritism of boys over girls in their homes and schools. Parents and teachers showed preference and special treatment to the girls as opposed to the boys.

Heavy chores and working during the weekends or after school is common amongst most families in Kibera. The girls reported to having to accompany their parents to sell/ take part in trade in the evenings after work and during the weekends thus not having enough time for their studies and to complete their homework.

Bullying is a common practice in schools and is mostly based one’s body image or background. Bullying is very common in schools in Kibera and mentors at Polycom as well as the teachers are constantly fighting and speaking against bullying in the schools.

Most of the drugs abused within the slum are bhang and cheap alcohol (chang’aa). These are easily available and children, in their curiosity and peer pressure are indulging in these drugs. Children in Kibera are also often used as drug traffickers by drug dealers as rarely or not would one suspect them.

There are still less girls than boys in classrooms in Kenya and a high number of girls never finish their education. Girls of every age-group are more excluded from education than boys. Often poverty combined with traditional perceptions and approaches to the role of women and girls are explanations to why there are fewer girls than boys in school.

Witnessing domestic violence has a tremendous impact on children’s well-being and their developmental growth. Survey shows that, due to societal and cultural norms, a considerable proportion (42%) of women and men in Kenya still believe that wife beating is acceptable under some conditions.

Some girls from the event raised concerns that their parents were less if not concerned about how they were doing. Parents have a role to play in shaping the behavior of their children through the process of nurturing which some parents often neglect. This may lead to high cases of indiscipline or a lack of sell worth amongst the children.

In the last five years there has been a worrying trend of increase in primary and secondary school girl drop out and decline in academic performance in informal settlement areas. It has been noted school girl’s dropout is high due to what is perceived to be lack of economic relevance of staying in school, early marriages and teenage pregnancies.

Capacity Building On Generational Equality Forum In The County